Each one of us hold a vision of what our singular “dream” bike looks like.  That conceptualized arrangement of alloy, paint, rubber and carbon would often consume my every thought during the recurrent flights required of my previous occupation.  Occasionally, I’d document the entire component breakdown and corresponding MSRP lines into a field notes journal, hoping for the day to come where I could pass the list off to my mechanic friends at the shop with the instructions to “make it happen.”

Following a fortuitous set of circumstances this past summer, I found myself relocating from Boulder to my native home of Texas.  On prior visits to Houston I had discovered Bicycle Speed Shop and had been fascinated with the intimacy of the close quarters space and bespoke offerings from the tiny little art deco shop in the Heights.  My commitment to Houston meant a new employer was necessary.  After leaving the corporate landscape for a highly enjoyable job at Rapha, I also knew that I would not be returning to a desk job.  Several conversations with Brian and Ryan led to new friendships and an opportunity at BSS upon my arrival in July.

Abandoning Colorado would have felt like a desertion to cycling were I not en route to a premier Mosaic dealer in BSS.  My mass produced carbon bike didn’t fall in line with the offerings at BSS, and frankly it wasn’t entirely comfortable.  My long awaited opportunity to hand over the field notes breakdown had just presented itself as a justifiable necessity.  A custom crafted Mosaic from Boulder now headlined my field notes dream build.

The first act in the sequence to ordering a custom frame is to have a consultation with your fitter.  Brian and I went over my riding history and preferences, likes and dislikes from preceding builds, injuries, and intentions for the new build.  We established that an RT-1d would fit my purposes exactly and proceeded to the Retül Müve bike to nail down the geometry.  A Retül fit is like no other bike fit that I had ever experienced before.  Brian wouldn’t be measuring the saddle setback with a plumb bob or hip angle with a goniometer, rather a series of LED markers were delicately fixed to the forefoot and heel of my shoe as well as my ankle, knee, hip, torso, shoulder, elbow and wrist.  A calibration procedure lasted but just a few seconds and a digital representation of myself then appeared on the large monitor ahead with pinpoint accuracy.  Brian recalled what I had voiced earlier in the day as the best  I had ever ridden and duplicated it’s stack and reach coordinates on the Müve bike.  Over the course of the next hour, I would follow Brian’s directives as he slightly re-arranged my position according to the tendencies only a master fitter could recognize.  Following each alteration, Brian would revert to the data displayed on the monitor and consider it’s overall impact.  A millimeter can make a world of a difference in the art of bike fitting, and the trust I had placed in Brian’s discernment came easily and naturally.

We settled on an efficient – and comfortable – geometry configuration and forwarded my numbers to Mosaic for Phillip Ball to confirm viability through BikeCAD.  What lies next would be to confirm paint and finish options so that Aaron Barcheck could begin fabrication on my RT-1d. 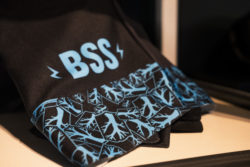 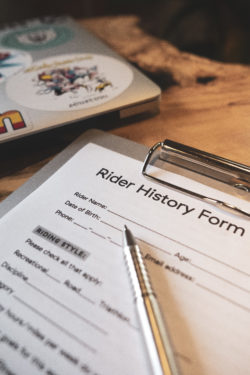 It all begins here. The rider history form initiates the conversation around what expectations and constraints I may hold. 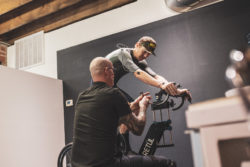 The Retül harness consists of 8 LED markers placed on a series of anatomical points between my wrist and forefoot. 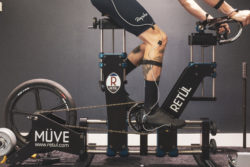 Retül’s Müve bike affords Brian the opportunity to make adjustments on the fly without requiring that I fully dismount. 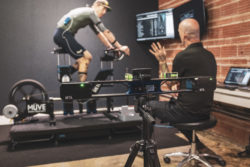 The tripod mounted sensor array receives a signal from each LED marker. A 3D rider model and data set is then displayed on the large screen display. 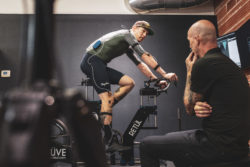 Retül’s motion capture technology is simply a precision tool from which Brian can extrapolate data from to influence his decision making as an experienced fitter. 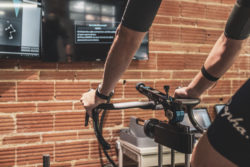 Because my Mosaic would have a painted stem, we needed to nail down the correct length during the intial fit. 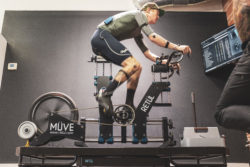 The Müve bike in motion. 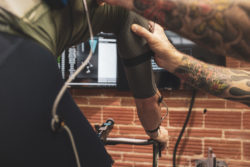 My first priority was to establish a balanced position wherein I could remain comfortable through extended ride durations. 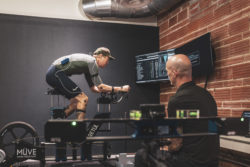 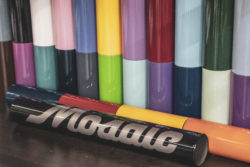 Finish options – stock or custom – are aplenty with Mosaic via their in house paint studio, Spectrum Paint and Powderworks. 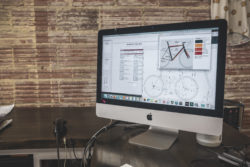 Retül fit coordinates, BikeCAD dimensions and proof of paint layout ensures that my new frame is crafted exactly as envisioned.